Gayles, Yorkshire - Where Our Story Began

Gayles is a small village in the Parish of Kirkby Ravensworth
(also spelled Kirby Ravensworth), wapentake of Gilling West and liberty of Richmondshire.
It is located approximately 5 miles NW of the North Yorkshire city of Richmond and is nestled in a peaceful valley between the lovely Rivers Swale and Tees. In 1820, the approximate date of
Jane Hunter's birth, the population of Gayles was 218. 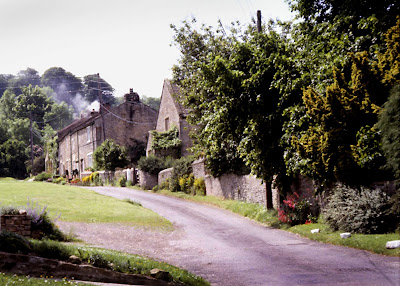 There are only a few streets in Gayles and virtually all houses are built from local stone. The town today would be immediately recognizable to the Hunter and Horrocks families as it has changed little over the last two centuries.
Posted by Chris at 4:20 PM No comments:

The Family of Sarah Horrocks Rarick 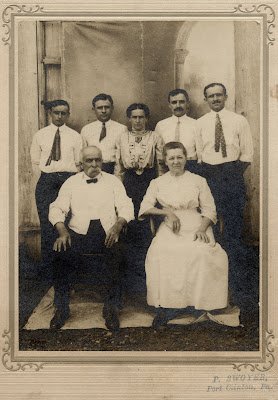 Sarah Horrocks Rarick was the third child and first daughter of William Horrocks and Jane Hunter Horrocks. She emigrated to the United States sometime during the 1860s and raised her family in Pennsylvania.
This photo appears to have been taken circa 1910, nearly 15 years after Sarah Horrocks Rarick's death. In the front row are her husband Levi Rarick and his second wife, Elmira Houser. The back row shows 5 of Sarah and Levi's surviving children. Left to right: Harry Rarick, George Rarick, Ida Rarick Shaw, Charles Rarick and Edward Rarick. Not pictured is daughter Meta Rarick.
Posted by Chris at 10:40 PM 1 comment: 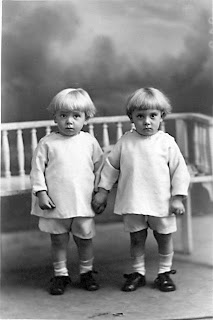 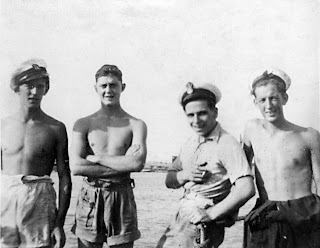 James (second from right) served in the Royal Navy during World War II. 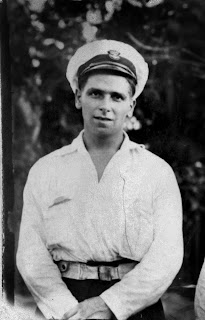 After the war James went on to become a mechanical engineer and company director.
He had a son called Peter (born 9 September, 1947) from his first marriage. Peter died in 2008.
James died at the young age of 56 in September, 1978.
Posted by Chris at 10:00 PM No comments:

We've found a new cousin, Liesa Wood of Somerset England. Liesa is descended from John Horrocks, the eldest son of William and Jane Horrocks. John's daughter Mary married into the Crowthers line. Liesa would like any cousin researching in the Manchester area for a bit of help with 20th Century records so if you can lend a hand please contact me at Chris34209@gmail.com and I will put you in contact.

Now if only we can find a cousin from James' line.
Posted by Chris at 5:02 PM No comments: 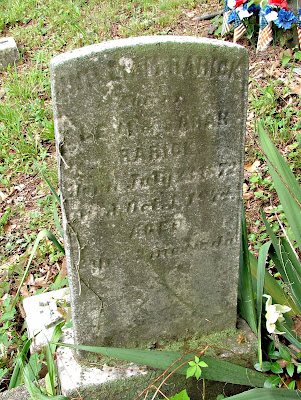 After some serious brush clearing the marker below was unearthed. The marker had been hidden for decades beneath some ornamental plantings. Although rather worn it reads "WILLIAM RARICK, son of Levi and Sarah Rarick. Born July 23, 1872  Died October 1, 1872  Age 2 yrs, 2 months 8 days. As William is not a name found in the Rarick line it is possible that Sarah's first son was named for her father William Horrocks.
Posted by Chris at 3:46 PM No comments:

George Hunter was the son of John Hunter & Alice Sharpe.

He was born in Whorlton, North Yorkshire & was baptised on 25 May 1760 at the Parish Church of Whorlton.

George son of John Hunter householder was baptised the 25th day of May. 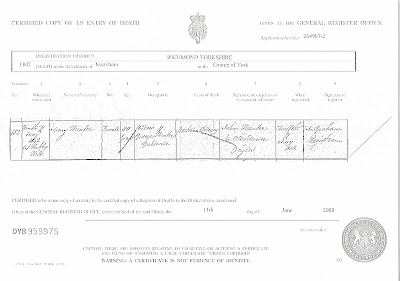 George & Mary were the grandparents of Jane Hunter to whom this blog is dedicated.
Posted by Chris at 1:51 PM No comments: 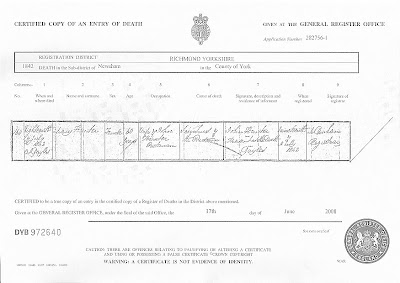 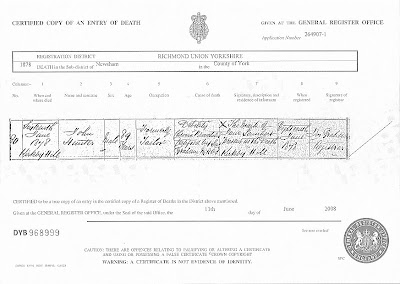 On the 1881 census Jane Lambert was described as an unmarried female, aged 52, living in the Alms Houses at Kirkby Hill. Her occupation was written as 'member of the Alms House'.

John & Mary were the parents of Jane Hunter to whom this blog is dedicated.
Posted by Chris at 11:51 AM No comments:

William was the son of William Horrocks a farmer. 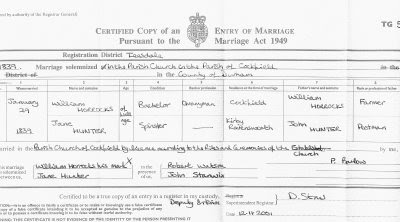 In 1841 the witness John Stanwix a farmer was living in Cockfield, Durham with his wife Jane.

Unfortunately William & Jane have not been found on any subsequent census.

Jane was the daughter of John Hunter & Mary.

She married William Horrocks on 29 Jan 1839 at the Parish Church, Cockfield, County Durham 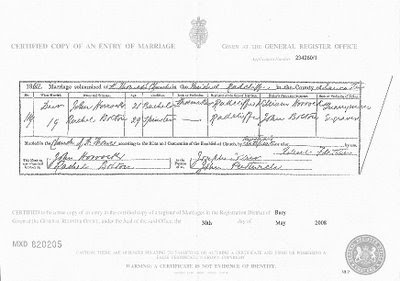 Walter married Mary Bradbury in 1886 in the town of Ashton.

Their son Joseph Horrocks was later born in Ashton-under-Lyne in 1889 and was the only child of Walter and Mary Horrocks.

She was born in 1867 in Radcliffe, Lancs

She was born in 1867 in Whitefield, Lancs

In 1889 Rachel Horrocks married Rueben Crowther, the brother of James Crowther, and in 1894 Rachel gave birth to their son Harold in Ashton-under-Lyne.
Posted by Chris at 11:17 PM No comments: 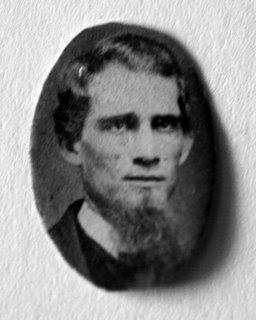 Photograph of George Hunter Horrocks date unknown
He was born in Gayles, North Yorkshire on 26 Sep 1841. 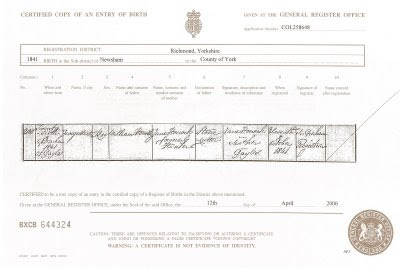 He was baptised George Hunter Horrick on 20 Oct 1841 at Kirby Ravensworth to William, quarryman, and Jane.

Not much is known about his childhood as we have been unable to locate him on the 1851 or 1861 census. 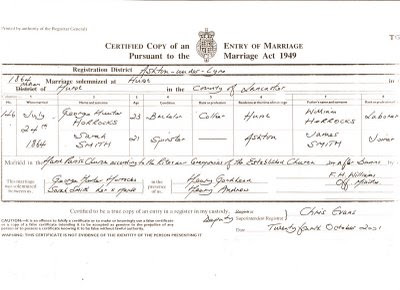 Sarah Mason Smith was born on 15 Apr 1844 in Halifax, Yorkshire. Her parents James Smith & Dinah Fieldhouse had been married the previous year on 4 Jun 1843 at the Register Office, Halifax.

George Hunter Horrocks died on the 29th october 1916 as stated on his death certificate. 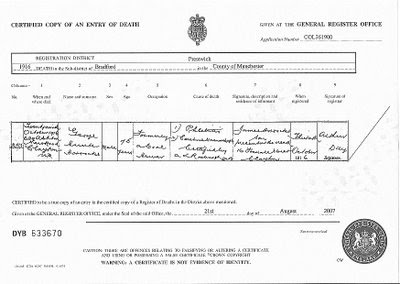 For some reason his date of death on his grave stone reads the 5th november 1916, perhaps this date was actually the date of his burial. 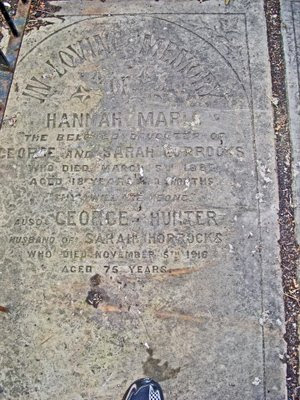 Around the time of William's death, a lot of people were starving in Lancashire due to the cotton famine.
Posted by Chris at 10:50 PM No comments:

George was baptised at St Cross Church on 4 Sep 1892

Arthur was baptised at St Cross Church on 3 May 1896

Mabel married Frank Gallacher & had one son Kenneth. I used to visit Auntie Mabel as a child. She lived at 689 Ashton New Road, Clayton (the family home). She was a lovely lady, very short & round. She lived to be over 100 & received a telegram from the Queen. Her son, Ken, still lives in Manchester but has no family photographs to share.
Posted by Chris at 10:46 PM No comments:

Hannah died on the 5th March 1888 in Ancoats hospital aged just 18 years old. She died at number 8 Heaps Buildings Ashton New Road Clayton which was the family home around this period. The cause of Hannah's death was certified as Hodgkinsons disease. Her father George was present at death and was described as a Coalminer. 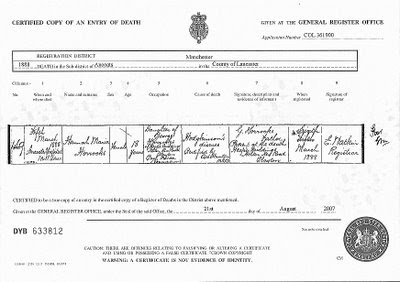 They had one child:
1. Lillian Lomas

In 1900 tragedy struck the family when Samuel, Mary's husband, died.

Unfortunately Mary died in 1902 leaving Lillian an orphan at the age of 7.

Lillian married Frank Summerfield on 29 May 1919 & they went on to have two daughters, Millicent & Doris.
Posted by Chris at 10:19 PM No comments: 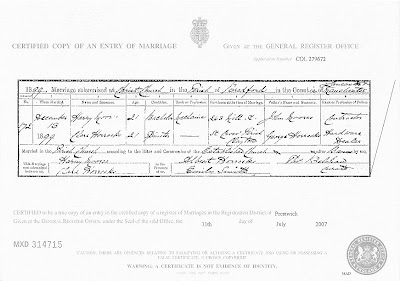 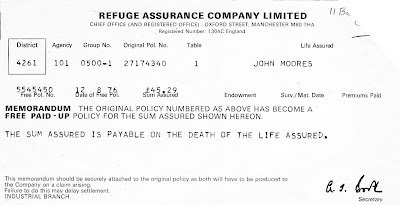 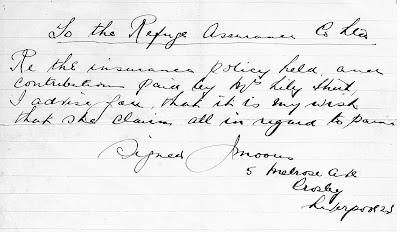 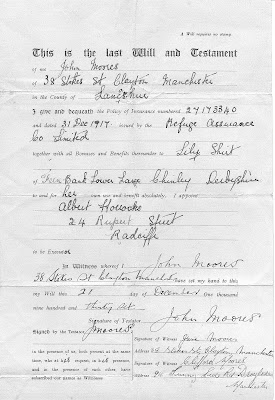 John Moores Will:This is the last Will & Testement of me John Moores of 38 Stokes Street, Clayton, Manchester in the county of Lancashire.
I give & bequeath the policy of Insurance numbered 27173340 and dated 31 Dec 1917 issued by the Refuge Assurance Co Limited together with all Bonuses & Benefits thereunder to Lily Shirt of Fern Bank, Lower Lane, Chinley, Derbyshire to and for her own use and benifit absolutely. I appoint Albert Horrocks 24 Rupert Street, Radcliffe to be Executor.
In witness whereof I John Moores 38 Stokes Street, Clayton, Manchester have set my hand to this my Will this 21 day of December One thousand nine hundred and thirty six. Signaure of Testator John Moores in the presence of us, both present at the same time, who at his request, in his presence and in the presence of each other, have subscribed our names as Witnesses.
Signature of Witness
Jane Moores address 38 Stokes Street, Clayton, Manchester
Clifford Moores address 94 Sunny Side Rd, Droylesdon, Manchester
Clara died on 27 Jan 1915
Posted by Chris at 5:56 PM No comments:

Albert Horrocks was the eighth child & third son of George Hunter Horrocks & Sarah Mason Smith
His birth was registered in the Mar qtr 1880, and he was baptised at St Cross Church, Clayton on 1st Feb 1880.

Albert & Martha had one son that we know of ... Albert
Albert Jnr. was born on 1 Jan 1920 in Bolton, Lancashire 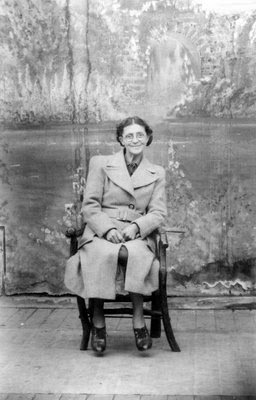 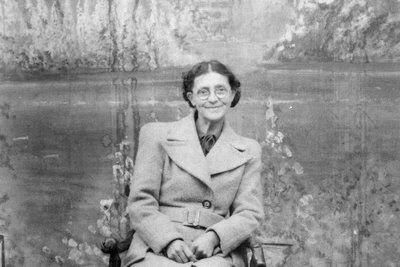 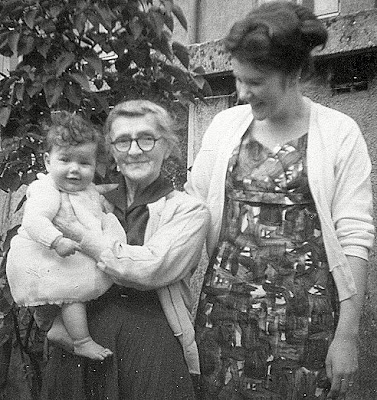 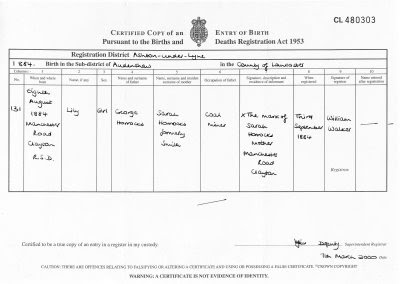 Lily was baptised at St Cross Church, Clayton on 1 Oct 1884.

At the time of Elizabeth's baptism Lily was living with her sister Clara Moores (formerley Horrocks).
Eizabeth Keeling Horrocks died a few months later. Her death was registered in the Sep qtr. 1905. She was buried at St Cross Church, Clayton on 18 Sep 1906 aged 5 months.

A huge thank you must go to another cousin Stan Laing, who has very kindly shared the information he has about our Horrocks family ~ thank you Stan. See Stan's informative blog at http://laingdescendants.blogspot.com

Another thank you goes to a new found cousin Craig, who has very kindly shared the information he has about our Horrocks family ~ thank you Craig.

Whether a family is bound together or scattered far apart,
Loved ones from the past and present are always in our heart.
Legacies of love and pride are passed down through the years,
Journals kept of triumphs, tragedies, and tears.
Tales of great joy, sacrifice, and sorrow can be found,
Character traits, personalities, and likenesses abound.
Families give us history; roots tied to our past
And a heritage that’s honored is one that’s sure to last.